Janet was one of the first to come forward to help me with my premature awareness project. I really wanted to share other family’s experiences as well as my own, and hopefully a little thing like this would raise some awareness and facilitate the understanding of the impact on families with premature born babies. If you’re reading this, I’d really love if you could donate what you can to Bliss here, their invaluable work supports and educates families with premature and sick babies.

After two failed IVFs and being 46 this was my last chance, so when I rang the hospital to find out the results of the blood test I had prepared myself for them saying it hadn’t worked and I had planned my response.  When they said I was pregnant I literally couldn’t get any sensible words out and must have sounded bonkers! I was so excited and happy.

The pregnancy went brilliantly until week 32 when I was told that the baby had stopped growing.  My whole world fell apart. As I was a high risk patient as I was old, IVF and overweight I was being watched and scanned very frequently (thank goodness!)  I was advised to be signed off work as the said it was very important for me to be able to count the kicks and monitor movement. As I am a teacher, I said this was impossible as my job was manic so agreed to stay at home and rest.  The next two weeks were so scary as they convinced me that the baby would be better to stay inside me for a few more weeks so that it could develop. Poole maternity hospital were amazing and let me go and check on the baby’s heart beat etc.  I pretty much lived there! When I got to 34 weeks 3 days I had another scan and they said it was important to get the baby out as he would now be developed and just needed to grow. I was given 2 days of steroids to help his lungs and then had a cesarean.

I was absolutely heart broken as I felt I had failed and put my baby in danger.

The birth was so so amazing.  It was a planned cesarean and so we knew we were first on the list on the Friday morning. My husband arrived early and got into his scrubs and crocs (he was given size 8 and he has size 13 feet!)  We then went into theatre and my husband was by my side.

There was music playing which made me want to dance and the first thing I heard was the doctors say “hello”, so I remember beaming as I knew they could see him.  They then sang happy birthday to him, which I loved and then they held him up above the screen. It was like the scene from Lion King.

They had pre-warned me that he may not make a sound and that he might need help breathing.  When I heard him cry, I knew then that the lungs were working. It also meant I was allowed a quick cuddle before he was taken away from me. My husband and I had been trying for years for a baby which I had always called James. As soon as I saw him, I said he doesn’t look like a James, and renamed him Alfie.  I think my husband thought I was high from the drugs! We had a few photos and then he had to go to Nicu. I was then taken to recovery as I had lost a great deal of blood.

After seeing him straight after the birth, I then went to see him in the incubator in the evening, but wasn’t allowed to hold him.  I then went to bed and woke up about 3am in the morning and got wheeled from my ward to Nicu and got my first real cuddle. No words can express the love I felt. 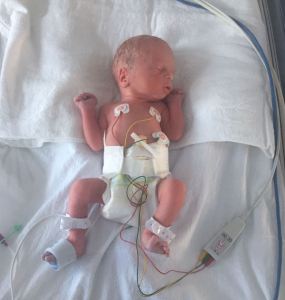 The early days were absolutely petrifying.  I was so scared that something terrible would happen and I was pretty much holding my breath until I could see he was ok.  Looking at the monitors and seeing his Sats made me feel comforted.

I found breast feeding a nightmare as my baby was so tiny and it was clearly hard work for him to latch on.

Alfie was mainly tube fed. I felt so much pressure trying to express milk and after having a cesarean found it so hard getting up through the night to get as much milk as I could.  The nurses were amazing as they could tell what an anxious mum I was. Once I was discharged I had 2 weeks of coming back and forth from home to hospital. I used to get there 7am and leave at 8pm every day.  Most of the time I was just watching Alfie in the incubator. I knew he needed lots of sleep and this would help him grow! I hated the time I had to leave him and couldn’t wait to be back in the morning. My partner came every evening and had a cuddle with Alfie.  He decided to take his paternity leave when we came home from hospital as he felt I would need more support then. The nurses taught me everything from changing a nappy, to bathing the baby and I cannot explain how amazing they were. They also were so sympathetic when I had a melt down.

When Alfie was born they suspected sepsis and treated him with antibiotics just in case.  Fortunately he didn’t have it. He was a bit anemic and so had a day with the ultraviolet light.  He lost weight when he was born so went down to 3lb 5 so had to stay in an incubator for a week. After a week he was moved to the nursery and I was told I had to grow him!  It also meant I was allowed far more cuddles.

I was there for 3 weeks and as it was close to Christmas, I was so excited when they said I could take him home.  The nurses had checked that Alfie was comfortable in his car seat and then we drove home. He was still only 4lbs so looked tiny in the seat.  I panicked when I took him home as he went from lots of trained professionals looking after him to just my husband and I who didn’t know very much.  I used to just watch him all through the night as I was too scared to sleep. I bought a monitor which beeped if he didn’t move This made me a nervous wreck!!  The hospital had got him into such a good routine that I just kept to it and he was a dream baby!

My baby now is 20 months old.  He is so gorgeous and makes me laugh so much.  His smile is infectious and I honestly feel so blessed to have such a happy and laid back baby.

My advice to any parent having a premature baby, is to be kind to themselves and not blame themselves for the baby being premature.  I would also advise them to read the guides that the unit give you.

I was very frightened and didn’t really want to talk to other people in the unit.  I wish now that I had as I think you can support one another.

Becoming a mum at 46 was very emotional as I really didn’t think it would ever happen.  Alfie is by far the best thing that has ever happened to me in my life and I didn’t realise it was possible to love someone as much as I love my Alfie.  I am eternally grateful for Poole and Bournemouth hospital for all the scans and the checks. As for Poole NICU, I will forever been in their debt for the way they looked after us both.  They are incredible.

Here’s laid back, nosey and mischievous Alfie now! We had such a fun photoshoot, Alfie was a gorgeous cheeky little monkey! 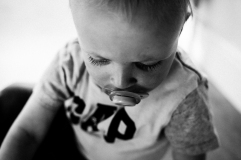 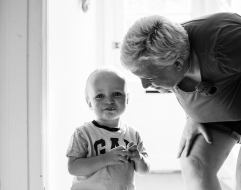 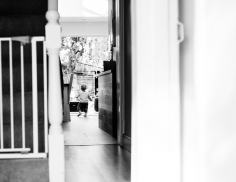 Sign up to my newsletter for recent shoots, availability, discounts and offers and more…